Why do people come back in your space? – Wednesday Why? 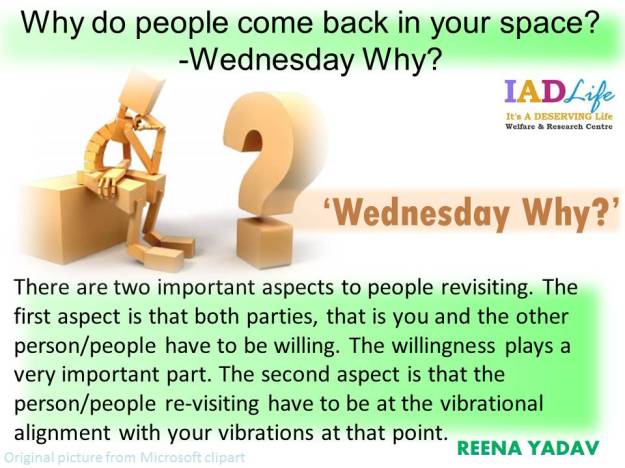 In this journey called life, some will walk with you. Some change paths. Some rejoin or revisit your path. But why do they revisit? The one or ones that you have been praying for and wishing for when they come back in your space it is your desire manifestation. It gives a new level of confidence and approval knowing that you are at the vibrational alignment with your desires and that the whole Universe has been working on your behalf to bring it true. O what a joy.

Now, what do you understand of the person/people you have left or have left on their own. You let go of them and have gotten comfortable with their leaving, their existence has little or no significance as per your understanding. And they suddenly pop back in your life. These are the ones whose coming back does not bring a smile on your face but gives a non-reactive expression which is symbolic of many more questions that you now have for the Universe. Most urgent of them is, why this person?

What do you make out of that? What message are they bringing to you? Are these second chances to resolve the unresolved or are they bearer of good news?

Case Study: One evening ‘W’ was walking in a very crowded lane of an arts and crafts exhibition that was recommended by her art teacher. As she was finding her way from one stall to another she noticed a man in a wheelchair pushed by another man coming her way. She hoped to the side and the wheel just missed her right feet. Just then she heard her name being called out from the direction in which she was walking. As a couple of people parted to give way for her to see who was calling out her name. It was her neighbour from the place where she used to reside nearly a decade ago. The moment her neighbor came close to her the neighbor started to talk her. “You look good, how is your mother.” ‘W’ was finding a reaction and when she could not get any she muttered back, “thank you, you…you look good too.” After that, for next few minutes, it was her neighbor who was continuously talking. She spoke about her life, asking questions and answering herself based on ‘W’s expressions. After the neighbor left the scene, ‘W’ started walking forward, still trying to understand the why of this chance meeting. A crowd where half of the city seemed to be present ‘W’ met her. There were people whom ‘W’ would have wanted to meet but she met her. While coming back home she tried to understand the reason for her meeting this person by recalling the conversations and her own feelings. ‘W’ noted that even though the questions were regarding her personal life she was calm and she was confident about her life, even though she did not get a chance to say much. ‘W’ had been having these re-entrances for some time. Earlier that day ‘W’ received a call from the web designer who had originally developed the company website but was not in touch for about a year. He suggested the new website look and also sent the new trial link he had made for the new webpage. Two days before this, she had a family friend from yesteryears call her. ‘W’ remembered having endearment towards this person. She had a pleasant short conversation with her. The highlight of the conversation was where this person insisted that she will help ‘W’ remember her yesteryears.

What were these revisits telling her?

‘W’ was writing a book on her life experiences and her intention that she set was that it reaches billions of people all over the planet. People were coming to help her remember her own past that she needed as data for her writing and the new website proposal was to showcase this at the international level.

The person might not stay long, but their guest appearance is enough to trigger the chain of thoughts that could bring to light the learning of an unresolved issue from the past and/or the message for the future.

So let people who go, let them leave and receive people who revisit. Do both with love and respect.

Do this with the confidence that the right entities will always be in your space so you will never have to wait or wonder.